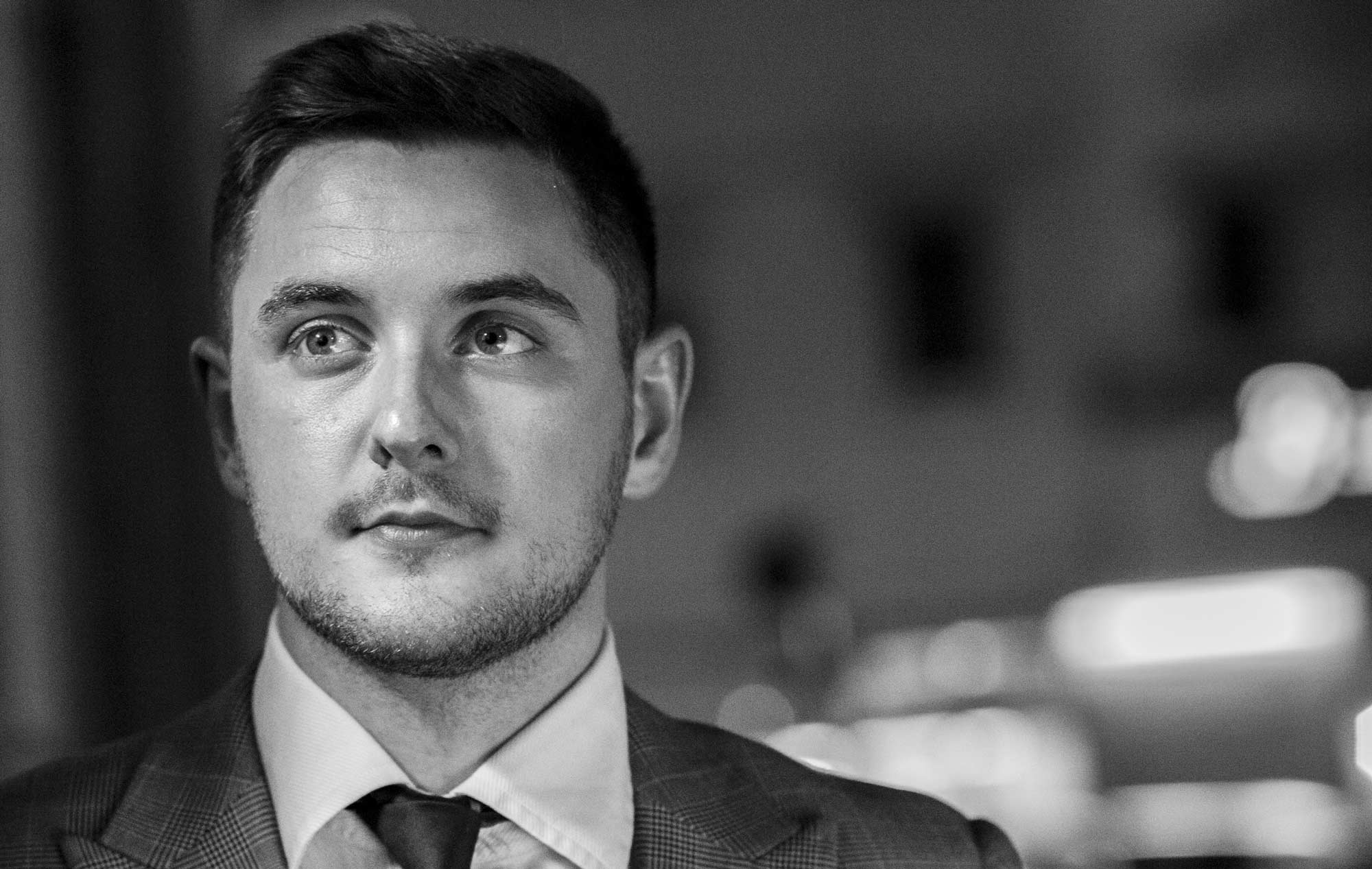 ‘THIS MANCUNIAN IS THE MAN FOR YOU...
HE OUT-BUBLÉS BUBLÉ’
THE TIMES

‘A SINGER TO LISTEN OUT FOR'
THE OBSERVER

‘A CAUSE FOR CELEBRATION'
METRO

ALEXANDER STEWART HAS BEEN PERFORMING FOR OVER 10 YEARS, BOTH HERE IN THE UK AND INTERNATIONALLY. RELEASING 2 STUDIO-ALBUMS (TO CRITICAL ACCLAIM) ALEXANDER HAS WOWED AUDIENCES WORLD WIDE, AS GUEST VOCALIST OF THE BBC CONCERT ORCHESTRA AND COUNT BASIE BIG BAND (TO NAME A FEW), ON STAGES FROM THE ROYAL ALBERT HALL, LONDON; TO THE VENETIAN CASINO THEATRE, MACAU.

THROUGH HIS UNIQUE, AUTHENTIC DELIVERY OF JAZZ CLASSICS, POPULAR FAVOURITES AND ORIGINAL SONGS, HE HAS, BY INVITATION; SUPPORTED GLADYS KNIGHT AND DIONNE WARWICK ON THEIR RESPECTIVE UK TOURS- AS WELL AS SEEN HIM SHARE THE BILLING WITH CURTIS STIGERS, ELTON JOHN AND EMILIE SANDE.

September 2011, a Manchester-born singer releases his debut album ‘All Or Nothing At All’ to critical acclaim. The record, praised by peers of the UK music industry, featured some of the best musicians in Britain. The ‘Stellar’ blend of original material, clever re-arrangements of some famous standards, alongside great pop songs, became a sure-fire hit, confirming a place for Alexander Stewart in the heart of the UK music scene.

Prior to the release of his debut album, Alexander had already featured with the stunning BBC Concert Orchestra and John Wilson Big Band, performed alongside Curtis Stigers and Buddy Greco (on a show hosted by Sir Michael Parkinson, on BBC Radio 2) and had sung live on national television on ITV1. No mean feat for a 23-year-old from Manchester, UK.

Alexander’s band, with MD Alex Webb at the helm, consisted of a who’s who in the world of UK musical talent. Alto saxophonist and award-winning Nathaniel Facey (Emperical), Winston Rollins (Jools Holland Rhythm And Blues Orchestra), Gary Crosby (Jazz Jamaica/ Tomorrow’s Warriors) and Freddie Gavita(Ronnie Scott’s All Stars) being just some of the faces included in the live line up.

The show toured much of the UK playing numerous, high-profile music festivals, including both the London and Cheltenham Jazz Festivals, sell-out shows at Ronnie Scott’s, the Elgar Room at the Royal Albert Hall and in fact almost all of London’s jazz rooms.

March 2012, after featuring in multiple performances for JAZZ.FM, Stewart was invited to support the legendary Dionne Warwick on her UK tour. The Grammy award-winning vocalist whose hits include ‘Say A Little Prayer’, ‘Walk On By’ and ‘The Look Of Love’ praised Alexander, calling him a ‘star’. The tour saw Alexander perform at The Sage Gateshead, the Birmingham Symphony Hall and at the Liverpool Philharmonic. One of the final dates included a performance in Stewart’s hometown, at The Bridgewater Hall, Manchester.

The summer of that year, Alexander’s branched out, trying his hand at musical theatre on the London stage. Alexander starred as one of the lead roles in ‘Jazz At Cafe Society, a new musical production about racial oppression in prohibition era New York. The show, curated by Alex Webb, starred Gwyneth Herbert and China Moses, (who recorded the duet ‘The Hard Way’ with Alexander on his debut album) made its debut at the London Jazz Festival.

As a regular on the Manchester music scene, Manchester Pride approached Alexander asking him to perform on their main stage on the opening night, in front of an audience of over 9,000 people. The evening, headlined by pop-rock band ‘The Feeling’, saw the first of many appearances Alexander would make supporting the charity.

Alexander continued touring throughout that year, expanding his live repertoire and profile, appearing at some of the most prestigious events in the social calendar. From Vogue Magazine, to the Miss World Final and Manchester United’s player of the Year Awards, Stewart performed alongside the likes of Emilie Sande, JLS and Mcfly.

With success here in Britain, Alexander ventured overseas, hoping to meet the demands and expectations of an ever-increasing fan base in Europe. Alexander and his group toured much of Europe including Germany, headlining sell out shows at over 12 festivals in that country alone.

Late September, Alexander was back in the UK making a welcome return to the Pizza Express Jazz Club Soho, celebrating his 26th birthday live with his band on stage, performing in front of yet another sold out audience.

In his final performances of that year, Alexander once again took up his role in ‘Café Society’ upon its return to London, before welcoming in 2013 at a star-studded New Year’s gala at Rosso; a Venue in Alexander’s hometown Manchester, owned by footballer and entrepreneur Rio Ferdinand.

Spring 2014 saw Stewart take up a three-month residency at the St James Theatre in London. The new venue hosted Alexander and his live band with special guest stars at each of the shows. The run had a one final date at the begging of April, 2014.

Alexander’s overwhelming support from the German audience led to the recording of his second album in Germany. The recording took place for SWR radio in front of an exclusive live audience, and the digital album, ‘The Live Session’ was released on Herzog Records in summer 2014.

Days after the release of the album, Alexander headlined Jazz Open, Stuttgart to another sell out audience. Gregory Porter, Herbie Hancock and Van Morrison were other featured headliners at the festival.

With subsequent shows in Holland, Germany, Austria and through the UK, Alexander was then invited to play two shows at Portugal’s most prestigious venues including the Cultural Centre of Belém in Lisbon. Both performances featured guest vocalist and Portuguese jazz singer Claudia Franco. Alexander was received with critical acclaim.

Having worked previously with harpist Alex Thomas on projects, the duo teamed up to tackle classical repertoire including the works of Vaughan Williams as part of a show curated for BBC radio 3. The live recording took place at the Manchester central library and featured readings by actress Maxine Peake as well as the director of Manchester’s world-renowned Hallé Orchestra, Sir Mark Elder.

Coming toward the climax of an already fruitful year, Alexander was given the opportunity of a lifetime.

Having grown up listening to recordings by Sinatra accompanied by the great Count Basie Orchestra, including the iconic album ‘Sinatra At The Sands’, Alexander was thrilled to be invited to be a guest vocalist on two performances with the legendary big band.

The orchestra, led by bandleader Scotty Barnhart, saw Alexander sing classics from ‘I’ve got you under my skin’ to ‘The Can’t Take That Away From Me’. Alexander made his Asia debut in December at the world-famous Venetian Hotel, Macau, China.

Proceeding the performances in China, Alexander ended 2014 in London, returning to the Royal Albert Hall to a sell-out audience for a final Christmas show, and filling the Elgar room for a third time.

2015 marked the start of a new project for Stewart (coinciding with what would have been Frank Sinatra’s 100th birthday) the ‘Sinatrathon live’, which is currently still in production.

Beginning of the recording started for the new album early 2015 with sessions taking place in both London and Prague. The new orchestral album features a UK big band of the finest jazz musicians recorded at Angel Studios London by Grammy -award winning engineer Steve Price. Arrangements are continued to add full string orchestration for the album to be recorded the following spring.